NEW YORK – February 24, 2020 – According to SPAC Research, a trusted third-party resource for information on US-listed SPACs, ICR was ranked the #1 advisor based on number of deals, total deal volume, and stock price performance among firms with four or more deals.

SPAC Research noted that “first-time sponsors frequently underestimate the challenge of the de-SPAC process, especially in moving shares from SPAC arbs into the hands of would-be fundamental holders in the target company. Many SPACs underperform at basic IR functions such as ensuring sell-side coverage, hosting an analyst day, and developing a modern website. So why aren’t all SPACs using IR firms?”

SPAC Research analyzed all SPACs to IPO since 2015, finding that 69 have closed deals. Of those 69…

ICR ranked #1 in stock price performance among firms with 4 or more deals (average price of $10.62) 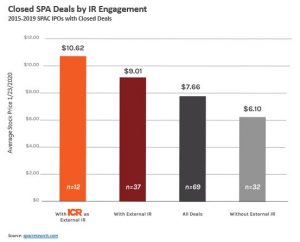 “As with many financing trends, ICR is at the forefront and we are pleased that we have been able to help management teams create and sustain significant equity value,” said Don Duffy, President of ICR. “We credit our ability to assemble teams that are well versed in the capital markets, truly understand the specific industry in question, and have vast experience helping companies maximize value through sophisticated investor relations and media relations programs.”

ICR is the largest advisor and communications consultant to SPACs, having completed dozens of transactions over the past decade. To obtain a copy of ICR’s 2019 Year of SPACs report please click here.

Back to all insights
We use cookies on our website to give you the most relevant experience by remembering your preferences and repeat visits. By clicking “Accept”, you consent to the use of ALL the cookies. However you may visit Cookie Settings to provide a controlled consent.
Cookie settingsACCEPT
Manage consent

This website uses cookies to improve your experience while you navigate through the website. Out of these cookies, the cookies that are categorized as necessary are stored on your browser as they are essential for the working of basic functionalities of the website. We also use third-party cookies that help us analyze and understand how you use this website. These cookies will be stored in your browser only with your consent. You also have the option to opt-out of these cookies. But opting out of some of these cookies may have an effect on your browsing experience.
Necessary Always Enabled
Necessary cookies are absolutely essential for the website to function properly. These cookies ensure basic functionalities and security features of the website, anonymously.
Functional
Functional cookies help to perform certain functionalities like sharing the content of the website on social media platforms, collect feedbacks, and other third-party features.
Performance
Performance cookies are used to understand and analyze the key performance indexes of the website which helps in delivering a better user experience for the visitors.
Analytics
Analytical cookies are used to understand how visitors interact with the website. These cookies help provide information on metrics the number of visitors, bounce rate, traffic source, etc.
Advertisement
Advertisement cookies are used to provide visitors with relevant ads and marketing campaigns. These cookies track visitors across websites and collect information to provide customized ads.
Others
Other uncategorized cookies are those that are being analyzed and have not been classified into a category as yet.
Save & Accept