The Current and Future State of Biotech Financing

This first appeared on the ICR Westwicke blog.

In the face of a global pandemic, capital markets have (understandably) seen unprecedented behavior over the past two years. With vaccines, rapid testing, and medical research at center stage of every news outlet and publication, the biotech sector has been especially active. There have been major shifts in both buy- and sell-side activities, leaving many companies wondering how to best raise capital as the world finds its new normal. As young and emerging biotech companies look forward, there is growing concern about the current and future state of funding.

Q: What is happening in the market and how does it reflect on biotech?

SVB Leerink’s Jack Bannister explains, “The S&P has pulled back from all time highs, but is overall still in a very healthy place. Big picture, equity is the default place for capital to go and in turn, the market remains in a perfectly healthy space.

For biotech, it’s certainly been more challenging since the peak back in February, but overall performance is steady. Overall, XBI’s measure of small and mid-cap biotechs is down about 11% this year, but longer term, it’s trading basically right in line with the broader market over the past couple of years,” he explains.

Q: You mentioned that there has been a bit of a decline, is there a reason for this pullback?

“I think what’s driven the pullback is a little bit of the reverse of what drove the spike to begin with,” Bannister says. “Which is, first, generalists are still rotating out of the sector. Most generalist funds got rather overweight biotech last year, as it was seen as a relative safe haven in a COVID world and in particular before the election. That’s naturally flipping back the other way now and we’re hoping to see some stability there and do actually have signs that generalists are reengaging, but it’s still a different dynamic than what we saw last year.

“2020 saw significant activity out of the gate that made investors a lot of money and kept the train moving. But as performance started to weaken a little bit in early 2021, some investors pulled back and said, ‘This isn’t the can’t-miss asset anymore. I have other uses for my capital. I’m already overweight biotech. Maybe I’ll think about another IPO.’

“This year, particularly the last couple of quarters, has looked more difficult, but really it looks a lot like any year that wasn’t 2020. We’ve seen a little bit of weakness and valuation sensitivity creep in during the third quarter, but by and large (and by any measure that’s not last year), it’s a relatively healthy market,” explains Bannister.

Q: As we look at capital markets, have we had a little bit of a fundamental re-rating in terms of the issuance that we’ll see in biotech, or are both of these years outliers and we’ve returned to that $20 to $25 billion of issuance that we saw for a number of years now?

Bannister says he’s in the former camp, stating, “If we zoom in on just IPOs and IPO volumes, 2021 is actually already a record year with a couple of months left to go. We’ve surpassed last year’s record, both of which, again, are double anything we’d ever seen before from an issuance standpoint. Until Q2 of 2020, there was not a single quarter with over $2 billion of biotech IPOs. Every quarter really since COVID, since Q2 of last year, has been over $3 billion. ​​This is a little bit of a combination of the number of deals coming to market … but it’s also driven by the deal size.

“The supersized biotech IPO has almost become the norm these days and the companies are often faced with the question of balancing dilution with capital needs. Investors have generally been applauding those to take more capital and help extend their cash runways such that they can get through multiple catalysts if they need to before they have to raise money again,” Bannister explains.

Q: Is the follow-on market a better measure of the health of the capital markets than the IPO market? Is it a viable funding option moving forward?

Bannister explains that, “An investor buying a follow-on is not necessarily looking for an immediate return out of the gate. Again, they’re taking advantage of the liquidity opportunity to build a position in a story they like. In turn, yes, this is usually a better measure of what’s the state of the market.”

He notes that, “Deals that come to market on the back of a major catalyst like a data-driven event have tended to go incredibly well even if the stock is at a materially higher place where  investors are happy to pay 50% more, even double the price where the stock was trading before data if it means that they can take a meaningful slug in the deal.”

Q: You mentioned that 2020 was an amazing year for SPAC issuance, can you speak to the landscape of SPACs this year and going forward?

Bannister: “Last year was crazy, this year has been even busier on an absolute basis, and it’s not just the healthcare phenomenon, this is true across all industries. It’s not just a function of investors looking for a new product actively to put their money into, but it is a noticeably different market today than it was, call it, in the first quarter or all of 2020.” 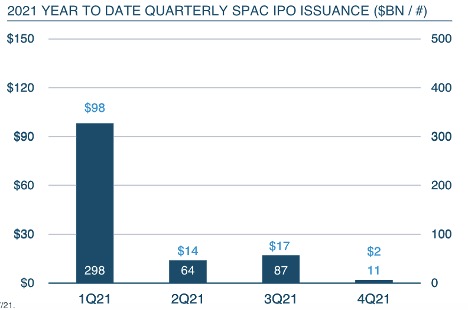 “That graphic says it all in terms of the issuance we’ve seen on the SPAC IPO front and how much it’s fallen off over the past couple of quarters. I can say, anecdotally, when we look at the next step in the process, identifying a target and De-SPAC PIPE and then also getting the deal closed, they’re getting more difficult, not less,” explains Bannister. He goes on to state, “I think the market in a lot of ways mirrors the IPO market, which is to say there are going to be periods when it’s more active and investors are looking for opportunities, but there are also going to be periods like now where getting that first step done may be easy, but getting the next step of the PIPE and actually getting the approval has proven rather difficult for a lot of companies coming out lately.”

Q: It’s clear there are multiple funding options for pre and post-IPO companies in the biotech sector, but with so many others competing for funding, how can they increase their chances of success?

Bannister and Cavasos explain that there are a number of factors that can help companies attract funding:

For the full conversation, including a deeper discussion on the current and future state of biotech funding, along with the specific ways biotech companies can attract attention and funding, watch the ICR Westwicke Healthcare Symposium webinar recap.

Back to all insights
We use cookies on our website to give you the most relevant experience by remembering your preferences and repeat visits. By clicking “Accept”, you consent to the use of ALL the cookies. However you may visit Cookie Settings to provide a controlled consent.
Cookie settingsACCEPT
Manage consent

This website uses cookies to improve your experience while you navigate through the website. Out of these cookies, the cookies that are categorized as necessary are stored on your browser as they are essential for the working of basic functionalities of the website. We also use third-party cookies that help us analyze and understand how you use this website. These cookies will be stored in your browser only with your consent. You also have the option to opt-out of these cookies. But opting out of some of these cookies may have an effect on your browsing experience.
Necessary Always Enabled
Necessary cookies are absolutely essential for the website to function properly. These cookies ensure basic functionalities and security features of the website, anonymously.
Functional
Functional cookies help to perform certain functionalities like sharing the content of the website on social media platforms, collect feedbacks, and other third-party features.
Performance
Performance cookies are used to understand and analyze the key performance indexes of the website which helps in delivering a better user experience for the visitors.
Analytics
Analytical cookies are used to understand how visitors interact with the website. These cookies help provide information on metrics the number of visitors, bounce rate, traffic source, etc.
Advertisement
Advertisement cookies are used to provide visitors with relevant ads and marketing campaigns. These cookies track visitors across websites and collect information to provide customized ads.
Others
Other uncategorized cookies are those that are being analyzed and have not been classified into a category as yet.
Save & Accept